Lighten Up! How Being Playful Can Reduce Clients’ Resistance

Lighten Up! How Being Playful Can Reduce Clients’ Resistance 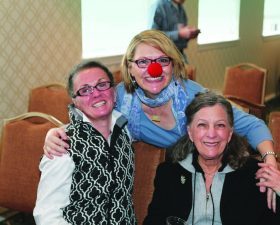 How do you connect with clients who are guarded or resistant to change? Therapist Courtney Armstrong suggests that sometimes it helps to lighten up and simply play.

Intuitively we know that humor and laughter are ardent antidotes for depression and anxiety, but many therapists avoid using humor for fear they will offend the client—or because they don’t think they can pull off being funny. In this article, I’ll share examples of how being playful with your clients can diffuse resistance, strengthen the therapeutic alliance, and spark breakthroughs in your sessions.

Lighthearted play is especially useful with guarded clients who equate emotional openness with painful vulnerability. I learned this early in my career working with groups of inner-city adolescents and the elderly. Neither of these groups was comfortable with the idea of psychotherapy, but when I started tossing a ball around or challenging them to a dance contest, they opened up and started talking.

In spite of my positive experiences using play in groups, I was hesitant about being playful in individual sessions because I feared my clients would think I was not taking their issues seriously. When I took the risk with a few stuck clients, however, I was surprised to find they were very receptive to using play to work through difficult emotions.

Being silly helps to create a sense of safety, especially with clients like Michael (all client names have been changed), who liked to spar and use sarcasm as a defense. We’d been working together for months on his struggles with alcoholism and a debilitating phobia of driving over bridges. Unfortunately, this bridge phobia severely limited his world, since our town is nicknamed Bridge City, and you can hardly go anywhere without driving over a lake or the Tennessee River. In our sessions, Michael often wore a mask of arrogance and loved to distract me with wisecracks anytime we got close to exploring his inner terror and pain. As much as he liked to hide behind this cheeky facade, I was quite worried he would drop out of therapy if we didn’t get a breakthrough soon. Worse, I was concerned he could be at high risk for suicide if he gave up on his goals or convinced himself that he couldn’t be helped.

One day, Michael started the session by saying, “Ah, I see you’re wearing new boots today. Is that what you do with the money from our sessions? Or are you wearing those because you think you’re going to kick my butt today with some psycho mumbo jumbo?”

If I directly confronted him with a statement such as, “I wonder what prompted you to say that? Does it feel like relationships have to be a power struggle?” he would just scoff and skirt the issue. Instead, I learned the best way to motivate Michael was to welcome his humor into the session and be playful with him. Moreover, playing helped my own emotional brain calm down and avoid feeling threatened by his unnerving comments.

So I laughed when he teased me about my boots and replied, “Yeah. I’ve got a challenge for you. I know you want to test me to see if I know what I’m doing and whether or not this therapy thing has been worth your money. I think you’re ready to cross a few small bridges on foot between now and our next session. You can start out with the little footbridge that crosses the creek in the park a couple of blocks from my office. I’ll even meet you there in my kick-ass boots, if you like.”

He laughed and said in a mocking voice, “No, Miss Courtney, I don’t need you to hold my hand. I can do it all by my wittle self.”

“I’ll bet I will,” he responded with a wry smile and added, “I’ll take a picture on my phone to prove it to you, Miss Smarty Pants.”

I nodded and said, “Yes, sir, I will. But I don’t have to worry about it because you’re so stubborn, I know you won’t do it.”

He leapt from the sofa. “Well, I’ll go do it right now and show you! I want my $50!” With that he drove right over to the park, marched across the bridge, and texted me a picture of him standing on the other side with his tongue sticking out.

He returned to my office within 25 minutes, grinning from ear to ear. Since we still had a few minutes left of his session, I invited him to sit down and handed him $50. As he reached out to take the money, his hands were trembling and his face was flushed. He gave me a brief hug and began to cry. “Thank you,” he said. “You got me all caught up in that. It’s just now hitting me what I did. I really did it. I can do this.”

I smiled, and said, “Yes, Michael, you absolutely can. We just had to find something more powerful than your fear to get you to take a risk.”

Mind you, if I made bets like this with all my clients, I’d be broke. The point I want to make is that sometimes we have to cajole clients into doing what is in their best interest. You do this not so much by coming up with a playful intervention, but by maintaining a playful attitude. I had no idea what I was going to do in Michael’s session before he arrived that day. But when he began by poking fun at me, I decided to mirror his teasing—realizing the only way I could get around his resistance was to align with it. Otherwise, he’d make me part of his struggle.

When you can act out the client’s resistance in a funny, non-threatening way, it puts him in the position of arguing for change. Furthermore, the guise of joking around allows clients like Michael to “save face” while trying out new skills.

In my last blog post “What Are Your Emotions Asking You to Do?” I mentioned that neuroscientist Jaak Panksepp believes PLAY is not a learned behavior but is actually one of the seven primary emotional systems that is hardwired into the brains of mammals and humans1. Play has been found to promote positive social bonding, collaboration, and flexibility in both humans and animals. In fact, in their lab at Washington State University, Panksepp & Burgdorf discovered that mice were more responsive to researchers who tickled or played with them than they were to researchers who didn’t initiate playful gestures2.

Play can also generate creative solutions to problems and has been associated with sparking “Aha!” moments of insight. Subramaniam et al. discovered this in a 2009 study, which demonstrated that people were better able to solve problems and puzzles when they were shown a comedy video beforehand, as opposed to watching a neutral or anxiety-provoking film before tackling a complex conundrum3.

Being playful in a session is what finally prompted a breakthrough for my client Laura who had been extremely frustrated with her inability to assert herself. She linked her fears back to interactions with a domineering mother who punished her any time she spoke up for herself. Laura had her “Aha!” moment after we did a humorous role-play where I played her mother acting haughty and offended while Laura intentionally disagreed with anything I said.

The more exaggerated we acted our roles, the funnier it got. Suddenly between fits of laughter, Laura exclaimed, “I realize why I give in to her! It’s not because I’m a wimp, it’s because it’s just easier. For the first time, I can see Mom’s insecurities and it doesn’t feel so personal. I feel like I could express my opinions now. It doesn’t have to be such a big deal!”

In sum, adopting a playful perspective won’t work for every client, but it is often a powerful way to bring daunting problems down to size, especially for clients who feel guarded or resistant to change. Not only does play help clients save face while trying out new skills, but it often sparks breakthroughs and creative solutions to problems.

And clients aren’t the only ones who benefit from play; it will help you as a therapist too. We often take ourselves too seriously and can feel overwhelmed by the emotional heaviness of our jobs. But therapy doesn’t always have to be so somber.

“Any therapist who can capture the therapeutic moment in mutually shared play episodes will have brought the client to the gateway of happy living.”

Yes. Happy living. Isn’t that what our jobs are really about?